Elliot Appel was born in New York City in 1952. As a child, he was fascinated by film and frequently sketched pictures of the celebrities he admired to see if he could capture a likeness. Mr. Appel continued sketching in this way through high school, and his first major encouragement was finishing second place in a poster-making contest for a play that was to be performed at his school. 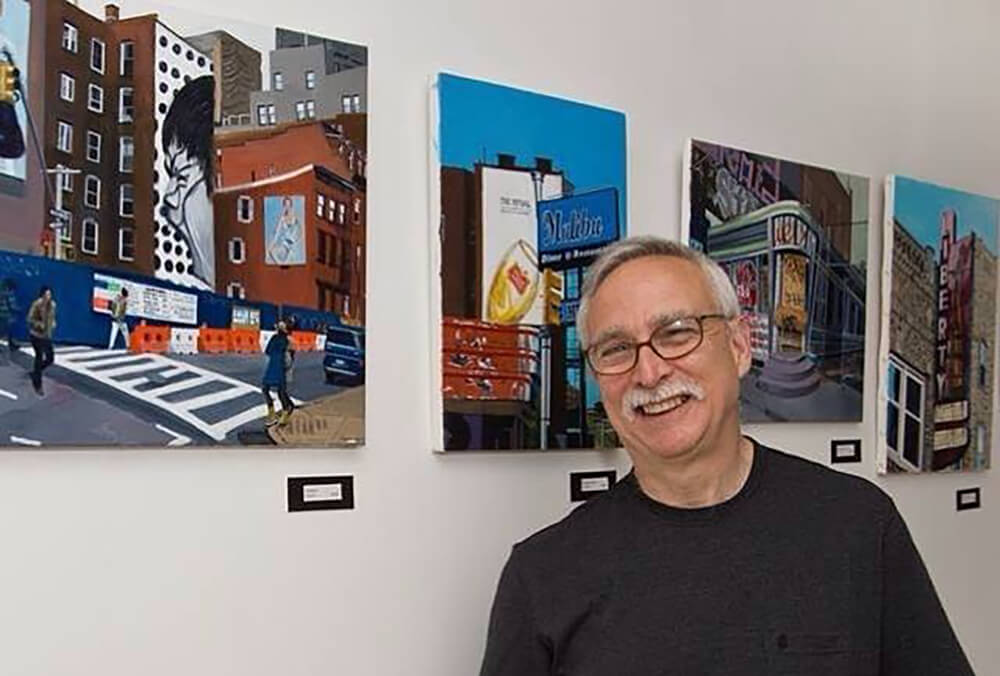 Subsequently, Mr. Appel enrolled in New York’s City College, registering for a degree in liberal arts but left college after one year to ‘see the world’. A self-taught artist, Mr. Appel spent the next few years traveling through Europe, fortifying the education he’d begun with trips to museums in Paris, Geneva, Florence, Milan, Venice, Rome and Athens In his early twenties, Mr. Appel’s cityscapes and storefronts call to mind the iconic images of American artists like John Sloan or Edward Hopper, who were influenced by film, and whose crisp, light-flooded takes on modern realistic street scenes inspired American film sets for decades. Appel’s images of old New York City storefronts, with their graffiti-covered doorways, city grime and sharp perspective both confront and draw the viewer into the vital, cinematic-like worlds that he creates. He has often said that he tries to capture “details of everyday life that people may not notice or take for granted as they rush from place to place.”

A long-time resident of Bayonne, New Jersey, Mr. Appel has exhibited his work in Soho, Lever House, Lincoln Center, the Snug Harbor Cultural Center in Staten Island and the Monmouth Museum. He has had one person shows at the Hoboken Historical Museum and the Watchung Arts Center in New Jersey. Most recently, he has exhibited his work at The Painting Center in Chelsea, the Ridgewood Art League, and the National Art League as well as online exhibits with the National Oil And Acrylics Painters Society. He is the recipient of several awards and has developed a loyal following within the tri-state area.